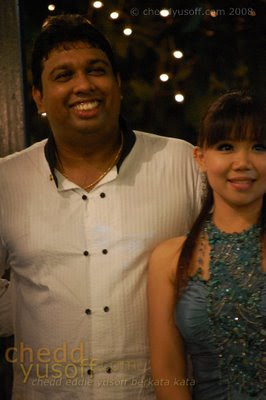 Congratulation Shanel Shanty James-Santiago and Aylwin
remember Shanel? alah..that cute sabahan girl who got paired up with me almost every other week during that reality - tv show way back in 2004 (yes! that reality TV show...Hu3) and if you remember that show, you would remember Aylwin, the music director of the show, the MD of Sunday Lollies (betul ke aku tulis ni?) and Ning Baizura's Music Director.
.
Anyway, 6 days ago they tied the knot in Taiping after courtship of 4 years (yes it has been 4 years) and i was the first to know they they were dating (i think so) way back then... and tonight they held KL reception in the Hideaway OKR KL.
. 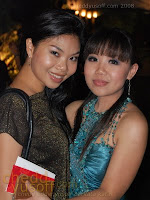 I was there, so were our realityTV mates, Misz and Jimmy. Ning and hubby was there and so was Miss J Victor and Nikki and off course Mr Manager.
.
I arrived late because as at 8pm i was still in my office trying to finish my work (plus the traffic was super BAD due to balik kampung rush) rushed over to the wedding reception, thinking about food for buka puasa (had coffee in the office earlier)... arrived at The Hideaway around 830pm and saw Mr Manager and Ning... went straight to work (business talk on my new project for Enfiniti for TV) and forgot that i havent eaten.... working still huhuhu...
.
But it was a nice gathering for friends and family and i am glad that i made it there, very private, very family, very fren-fren kind. i like. i enjoyed. almost didn't because of work and traffic. but i am glad i did.
.
Congratulation again for both Shanel & Aylwin...
read Shanel's own experience on her wedding at her blog.

about the 3rd time... bigger better ! 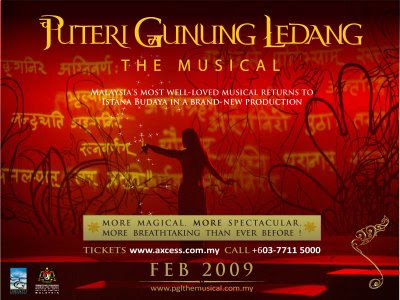 The names of all ticket purchasers in the month of October 2008 will go into a draw whereby 10 lucky winners will win a dinner experience with Tiara Jacquelina and Steven Rahman Hughes. Names will be picked on the 1st of November and winners will be notified by phone. For more information, please visit
http://www.pglthemusical.com.my/,
http://www.enfiniti.com.my/,
http://www.axcess.com.my/ or call +603 7958 7877.

Ticket promotions
Early bird October promotionThe names of all ticket
purchasers in the month of October 2008 will go into a draw whereby 10 lucky winners will win a dinner experience with Tiara Jacquelina and Steven Rahman Hughes. Names will be picked on the 1st of November and winners will be notified by phone. For more information, please visit

About Missing the innocent time of 'yesteryears'

I really do... Those were the time of simplicity the time when no troubles could trouble us. No worries on making mistakes, no fear on anything... Just a day to day life.

Why suddenly I am posting this I can't say why, maybe I am troubled with current happening that I wish I am still as innocent as I am in that photo that was taken by my late dad almost 33 years ago.

Oh I miss those days although I don't hve any memories about it.

Promote Your Page Too

busy adjusting himself from being Tuah's understudy, playing bendahara's role and Assistant Director for PGLM3 into writing new proposals and helping AF7's principal, Tiara Jacquelina :) and now starts writing for next big projects!

being the Assistant Director and the understudy for Hang Tuah for PGLM3, and off course still happy the super project he was in, P Ramlee The Musical in which he was the supporting cast as Sukardi (P Ramlee's close friend). part of the original Ensemble for Puteri Gunung Ledang The Musical for Season 1 and 2 as well as Esplanade Singapore's PGL tour. And on tv land, Chedd recently concluded his 2nd run/season on TV2's Keluarga Adam season 2 and completed his tasks as Warm-ups tutor for Akademi Fantasia 5 on Astro Ria. Also recently seen on Istana Budaya's stage again for MASAKINI Theater's URMI, stage adaptation of William Shakespeare's Tempest