about PGLM3 and RHB

In support of the local performing arts, the RHB Banking Group brings the hit musical production, Puteri Gunung Ledang the Musical (PGLM), back to the Malaysian entertainment scene come February 2009. Back by popular demand, this will be the third season of the PGLTM in the country. The previous two seasons had received overwhelming response from avid performing arts fans and the general public alike.

“Puteri Gunung Ledang the Musical proved to be a national phenomenon when it was staged here in Kuala Lumpur, twice, in 2006 and it went on to create a stir on the Singaporean shores later in the year. The secret, I believe, lies in the familiar storyline with a very rich cultural heritage that was brought to life by the superb, flawless performance by a team of highly talented entertainers from the local theatre scene. RHB is proud to be able to bring back this production not only for those who have an aesthetic appreciation for the arts and cultural heritage, but also for our clients as a way of thanking them for their continuous support towards the Group,” said Michael J. Barrett, the Group Managing Director of the RHB Banking Group.

When asked about PGLM’s return, Tiara Jacquelina, who holds the lead role of Puteri and is the Executive Producer, said, “It’s wonderful knowing you have the best of the best working together on your team, and all of them challenging themselves to do better. We have a great synergy amongst us, great respect and admiration for each other’s work, and each of us continuously energizes the other, that’s something you can’t plan for – it’s either there or it’s not. The Arts is a powerful unifying force amongst people and with the growing support and generosity of patrons of the Arts like RHB, the public can develop their appreciation of the Arts, which is integral to the soul of any country.”

“We have enjoyed tremendous success from this production, and we are very excited to be able to bring it back for a third season. We are also very pleased to be able to collaborate with the RHB Banking Group for this season; it brings to mind that regardless of how much has evolved in this fast-paced, industrialized society, the love of the arts is still very much alive,” said Boudeng Edruce, General Manager of Enfiniti Productions.

The RHB Banking Group has previously sponsored numerous performances and shows in pursuit of supporting performing arts, and this time the Group is very pleased to work with Enfiniti Productions in bringing back PGLTM. The Group looks forward to presenting an equally excellent – if not better – show to the public this time round.
­­­­­­­­­­­­­­­­­­­­­­
Issued by Group Corporate Communications Division, RHB Capital Berhad.
dikeluarkan dari kepala Chedd eddie Yusoff pada jam 6:00:00 PM No comments: Links to this post 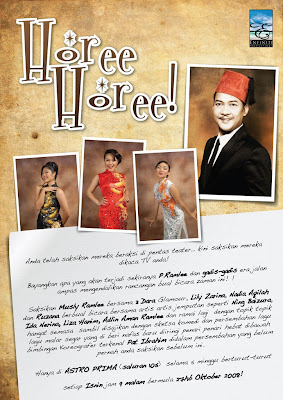 Promote Your Page Too

busy adjusting himself from being Tuah's understudy, playing bendahara's role and Assistant Director for PGLM3 into writing new proposals and helping AF7's principal, Tiara Jacquelina :) and now starts writing for next big projects!

being the Assistant Director and the understudy for Hang Tuah for PGLM3, and off course still happy the super project he was in, P Ramlee The Musical in which he was the supporting cast as Sukardi (P Ramlee's close friend). part of the original Ensemble for Puteri Gunung Ledang The Musical for Season 1 and 2 as well as Esplanade Singapore's PGL tour. And on tv land, Chedd recently concluded his 2nd run/season on TV2's Keluarga Adam season 2 and completed his tasks as Warm-ups tutor for Akademi Fantasia 5 on Astro Ria. Also recently seen on Istana Budaya's stage again for MASAKINI Theater's URMI, stage adaptation of William Shakespeare's Tempest